Call us at (816) 474-2900 to schedule your test drive on this Deep Sea Blue 2018 Kia Rio S. We are open for business and we’re prioritizing your health and safety. Test drives delivered to your home, deals made over the phone or email, complimentary delivery of vehicles and paperwork. From the comfort of your home you can shop, get pricing, and trade value. We will deliver your vehicle and paperwork. Certified. Deep Sea Blue 2018 Kia Rio S FWD 6-Speed Automatic 1.6L I4 DGI 16V Black Cloth. 28/37 City/Highway MPG Kia Certified Pre-Owned Details: * Vehicle History * 165 Point Inspection * Transferable Warranty * Includes Rental Car and Trip Interruption Reimbursement * Roadside Assistance * Limited Warranty: 12 Month/12,000 Mile (whichever comes first) "Platinum Coverage" from certified purchase date * Warranty Deductible: $50 * Powertrain Limited Warranty: 120 Month/100,000 Mile (whichever comes first) from original in-service date Want to know more? Text us at (913) 215-5243 to chat about this vehicle! Oakes Mitsubishi strives to bring you the lowest prices possible, not just in the Kansas City area, but the entire United States. With our laid-back, quick and pain-free sales process, our high standard of customer service and our many financing options, we know you will find Oakes Auto to be a welcome change from your past experiences. All of our vehicles are reconditioned at our state-of-the-art service center and undergo a multi-point inspection to confirm they meet our expectations for our customers. Vehicle price as shown includes $1000 Dealer Discount, $1000 Trade-In Discount (requires 2013 Model year or newer and less than 100,000 miles), and Finance Discount (requires financing through Ally Auto Finance or Kia Motors Finance; not all buyers will qualify. Located in Kansas City: 7301 State Ave, Kansas City, KS 66112 (913) 222-5300.
Model Overview
The Kia Rio is powered by a 1.6L direct injection 4-cylinder engine making 130 hp. Power is sent to the front wheels via either a 6-speed manual or a 6-speed automatic. The manual transmission is standard on the base LX trim, while the auto comes standard on all other trim levels. Fuel economy is excellent for a non-hybrid car like this with a claimed combined city and highway mileage of 32 mpg for either transmission, with 37 mpg supposedly attainable on the highway.
Standard features on subcompacts like the Rio tend to be pretty sparse, but base LX-trimmed Rios come standard with power door locks, air conditioning, a 5-inch touchscreen controlling a stereo with MP3 and SiriusXM capabilities, a USB input jack, steering wheel-mounted audio controls and automatic headlights. 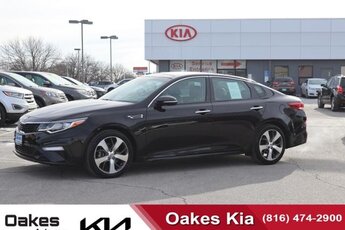