Call us at (816) 474-2900 to schedule your test drive on this Platinum Graphite Metallic 2013 Nissan Quest 3.5 SL. We are open for business and we’re prioritizing your health and safety. Test drives delivered to your home, deals made over the phone or email, complimentary delivery of vehicles and paperwork. From the comfort of your home you can shop, get pricing, and trade value. We will deliver your vehicle and paperwork. Platinum Graphite Metallic 2013 Nissan Quest 3.5 SL FWD CVT 3.5L V6 DOHC 24V Recent Arrival! Odometer is 22542 miles below market average! Want to know more? Text us at (913) 215-5243 to chat about this vehicle! Oakes Mitsubishi strives to bring you the lowest prices possible, not just in the Kansas City area, but the entire United States. With our laid-back, quick and pain-free sales process, our high standard of customer service and our many financing options, we know you will find Oakes Auto to be a welcome change from your past experiences. All of our vehicles are reconditioned at our state-of-the-art service center and undergo a multi-point inspection to confirm they meet our expectations for our customers. Vehicle price as shown includes $1000 Dealer Discount, $1000 Trade-In Discount (requires 2013 Model year or newer and less than 100,000 miles), and Finance Discount (requires financing through Ally Auto Finance or Kia Motors Finance; not all buyers will qualify. Located in Kansas City: 7301 State Ave, Kansas City, KS 66112 (913) 222-5300.
Model Overview
The Quest has rather unconventional styling for a minivan. Underneath its skin, the Quest features a powerful conventional powertrain. All Quest models get a smooth 3.5L V6 engine and a continuously variable transmission. This combination is good for 260 horsepower to the front wheels.
As with most minivans, the Quest is designed to handle like a car, albeit a tall and heavy one. The 4-wheel independent suspension includes front and rear stabilizer bars to help composure in tight corners, and 4-wheel vented anti-lock disc brakes bring secure stops with a full load and included brake assist to help in panic stops.

Safety-wise, the Quest includes dual front and side-impact airbags and curtains for the rear occupants. There are traction and stability control systems as well. Tire pressure monitoring comes standard.

While the newest Quest doesn't try to be quite as quirky as its ancestors, Nissan made sure it has sacrificed none of its style. The Quest's interior is roomy and comfortable. The seats are stylish for a vehicle designed to carry up to 7. The rear seats can fold-flat and the center console can be removed completely to allow many different cargo/seating configurations. Seat-fabric is cloth on the S and SV trims, and leather on the SL and LE. The second-row's captain's chairs fold-forward to allow three third-row passengers to squeeze their way back.

All the Quest's stylishness doesn't detract from function. The Quest comes with everything expected of a minivan in 2013, including variable wipers, a 6-CD changer audio system with an auxiliary audio input, a trip computer, power doors and locks, an auto-cinching rear liftgate, keyless entry and front and rear air conditioning.

On the base S trim, the wheels are alloy, and the Quest gets fog lamps and Bluetooth as well as an audio system that includes a 4.3-inch display and iPod integration. The driver seat is power adjustable, while the steering wheel has integrated audio controls and is leather-wrapped. The doors slide on their own power by the push of a button. The climate control can vary temperatures for three distinct zones. There's a rearview monitor as well.

On the SL, the wheels get upgraded to the 18-inch alloy variety, a roof rack gets added on top, the upgraded mirrors include integrated turn signals, the seat trim is leather and heated in front and the third-row is so-called "quick release" for easy stowage.

On the top-of-the-line LE, the headlamps are xenon HID, the audio system is powered by Bose and features 12 speakers, a subwoofer and satellite radio. There is a rear entertainment system that can play DVDs and includes a 9.3 GB storage drive for digital music. On the LE, the liftgate can be opened with one touch and it's powered as well.

One especially noteworthy feature optional on the Quest remains the dual-panel moonroof, which is a step ahead of conventional sunroof designs and allows direct light into the second and third rows. 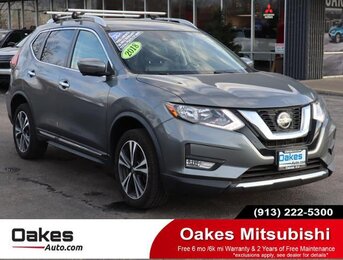